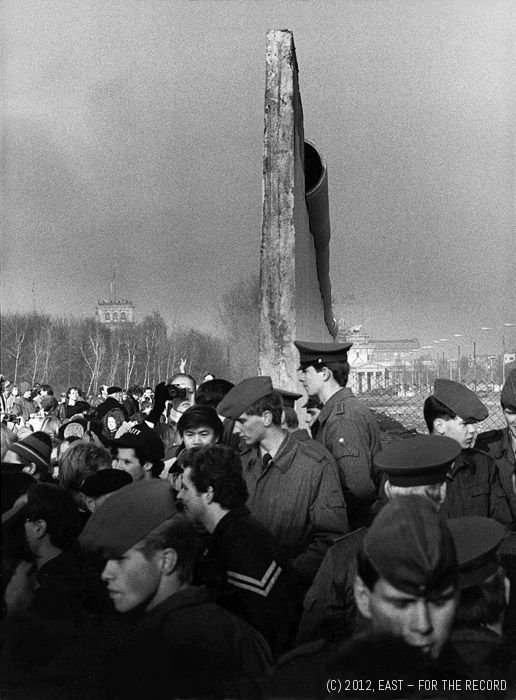 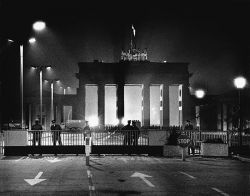 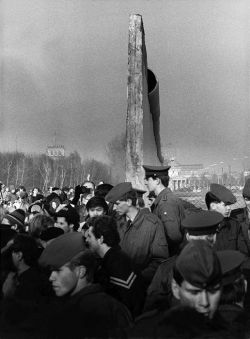 In the evening of 9 November 1989 I watched excerpts of the press conference with Günter Schabowski on the TV news and listened as he announced that the German-German boundary would be open from now on. Of course I did not trust my ears at first, it ought to be that easy now…hardly imaginable!
The next morning I stormed into the editorial office of the “Süddeutsche Zeitung” for which I have been taking photos since 1986, and I entered a chief editor’s office. I told him: “I think I am driving to Berlin …”. The answer came promptly: “Yes, yes go there, go there”.
I snatched one of the last seats on an airplane from Munich to Berlin. Having arrived there, it was extremely difficult to get to the East, where a room had been booked for me at the former Grand Hotel on Friedrichstraße. It was the only hotel in which foreigners from the West could find accommodation. Chaos prevailed on the streets and I arrived rather late at the border crossing of Heinrich-Heine-Straße. My ‘West taxi’ was not allowed to drive on from that point although the border was in fact open. But there was no ‘East taxi’ to be seen far and wide. Consequently I had to hitchhike and I asked a person from West Berlin who willingly took me in his Golf to the hotel as he ‘was about to drive there anyway to have a look’.
Of course upon arrival I immediately left in the direction of the Brandenburg Gate. There was indeed no getting through but the glittering light of the TV spotlights came from the west, one could sense and hear it too: all hell broke loose.  That’s how this night photograph was taken at the Brandenburg Gate – the arrows on the asphalt in this picture are peculiar.
They already point to both directions.

Two days later, on 12 November, the wall was opened at Potsdamer Platz. The photography with the wall profile was produced there. When looking at the picture it always appears absurd to me that this construction, appearing so small from this perspective, has been able to split a country, a nation.

The day when feelings broke open the bulwark
by Michael Rutschky, Süddeutsche Zeitung of 25–26/09/1989
One will precisely know later what the pictures were supposed to mean. Glorious history began there – or a terrible disaster. There will be no consensus on that but everyone will claim to have known how the continuation had already been established in this beginning. Therefore it should be recorded here: Who took part in it now, did not know what this all meant. This bestowed an incomparable beauty on these events. Like never before since the sixties, the big festival had already come loose. The party no one wanted to miss. The vesper time Potsdamer Platz, having just freshly opened up in the morning before, distressed me the most. In huge quantities but in a relaxed manner the visitors surged back to their city which was sharply illuminated from spotlights while a loudspeaker voice demanded: “Please keep your identity papers ready!” This could have been a terrible scene at a movie, it was a happy one though. At the left side the masses passed a little hill that was already indeterminable in the darkness of the empty square: the heart of the darkness, the Führer’s bunker, which did not let itself be flattened totally. I may claim from my own distress that it was tied in with this thought: the destroying energies, which were unleashed there to the last, are now being balanced. The war which then continued as the cold one and during which this dam wall had to be erected, this war is over. But this is merely a personal interpretation. It cannot change the fact that it remains obscure how history will proceed after just having opened up to such excited masses. And as mentioned this bestows its incomparable beauty on the moment.