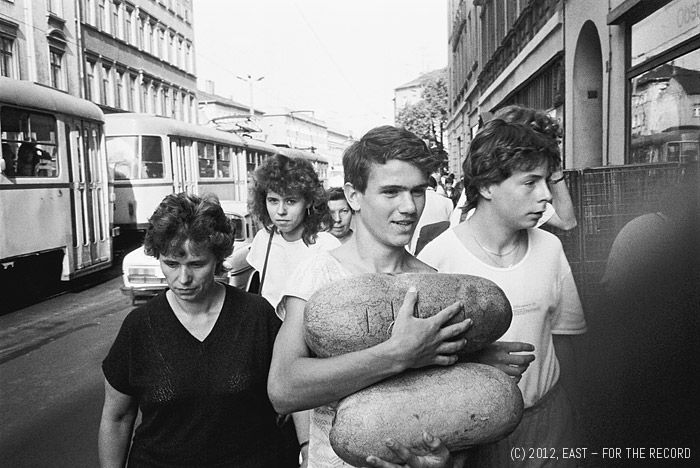 Invited to participate in this project, a contact print from this time catches my eye with its variety of themes. The old residential area of Jahn-Allee is sketchily portrayed.  It was still very warm and for some obscure reason the greengrocer was selling fresh country bread on a temporary stand on the street, with people literally tearing it from his hands. As a young man passed me with two loaves he had purchased the situation reminded me of Gerhard Gäbler’s recent picture of a woman in Eisenbahnstraße carrying home a bunch of bananas as if they were a treasure – images often give rise to further images. Principally, however, we had been preoccupied for months with the move. Consequently, the same film contains a group photo of the strong men from Gebauer, at that time the largest removals firm in Leipzig, a few pictures of a first cycle ride through Wahren (a brief portrayal of the increasingly decrepit advertisement for a former photography shop) and on to the Luppe, where I captured the geometrically memorable constellation of a family in the meadow, including sheep in the background.